have you ever been caught by a smartbomber in low sec and wondered how he was able to kill you? Or have you maybe thought about trying smartbombing pods yourself, but do not yet know how it works exactly?

This article will provide you with the basic know-how needed to become a smartbomber yourself, but will also help you to understand how you can evade smartbombers when traveling through low sec.

Before we go into the details, lets look at why players are becoming smartbombers in low sec:

But of course they are also some drawbacks to consider before starting a smartbomber career:

In order to be effective as a smartbomber it is important to understand the basic mechanics.

Smartbombers use highly specialized ships, so you are only able to kill a very limited group of ships and nothing else. However, in contrast to many other PVP activites in Eve Online, you will be able to kill your targets every time and with ease.

A popular ship for smartbombing and a good starter ship for this profession is the Maller. With this ship you are able to kill:

Experienced smartbombers also use T1 battleships (e.g. Rokh), T3 cruisers (e.g. Proteus) and even blackops battleships (e.g. Sin) which allows you to kill bigger ships or use advanced tactics. But for now we will focus on the smartbombing Maller.

After a lot of EFT theory-crafting, damage calculations and testing I settled with the following fitting for my smartbombing Maller. This fit has proven to be highly effective in killing the above mentioned ship types and also has several defensive capabilities which will increase your survive-ability. 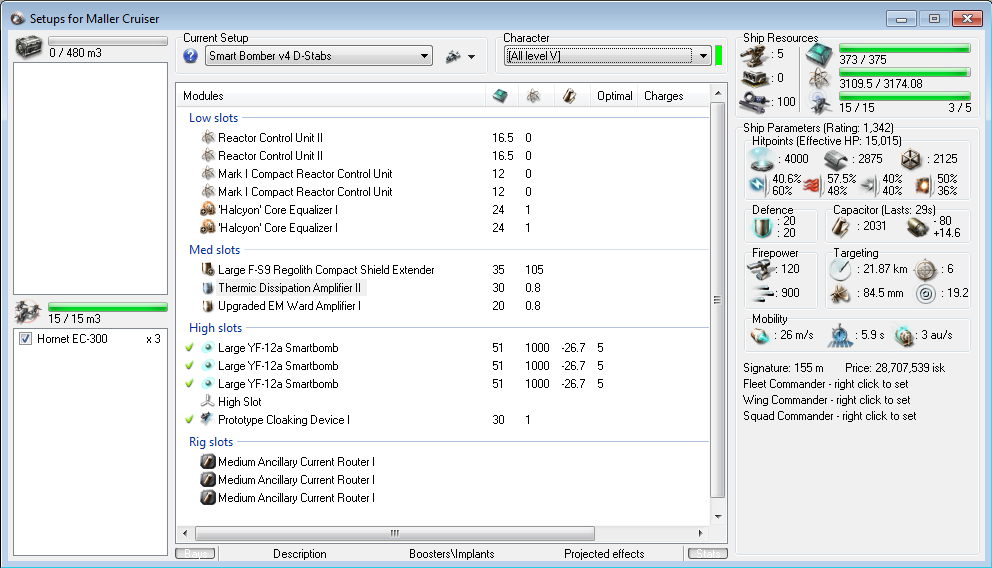 (See the Appendix at the bottum of this article for the Maller fitting in EFT format.)

When you see a kill-able target arriving:

When you see a non kill-able target arriving:

In order to be able to effectively kill your targets you need to get two things right: positioning and timing.

Please note that you will not be able to kill targets coming jumping into your system through your out-gate. The reason is that they will land at a range of 12 km or more from the gate, which is always outside your kill-zone (5 + 5 km from gate).

To get as many kills as possible you want to pick your system and gate carefully. Here are the most important criteria to consider:

Now that we have covered the basic mechanics and tactics of smartbombing we are ready to look at some of the more advanced tactics. These will usually require are much higher ISK investment, involve more risk and a lot of skills and experience to get right, so they are usually only pursued by experienced smartbombers.

The following table gives you an overview about what ship types can be killed with different smarbomber clases :

Calculated with 100% thermal damage against EHP of each target ship type using the Smartbomb Damage Calulator. (see also section “Choosing the right smartbombs for your ship” for details)

The optimal configuration of smartbombs for your ship depends on many factors, like the size of your ship, the kind of tactics you plan to use, how much ISK you are willing to invest, etc. I find using 3 x T1 Large therm SBs the best choice for the stationary cloaky smartbombing Maller, because it allows you to also kill shuttles and rookie ships (See also Appendix – Damage type comparison). But you may for example choose to focus on pods only, which would allow you to downgrade your smartbombs and get more fitting room for tank, prop mod etc.

In order to quickly see what ship types are killable with any combination of smartbombs I have created a simple tool called the Smartbomb Damage Calculator with Google Sheets. Feel free to make a copy and use it for your own fitting purposes. 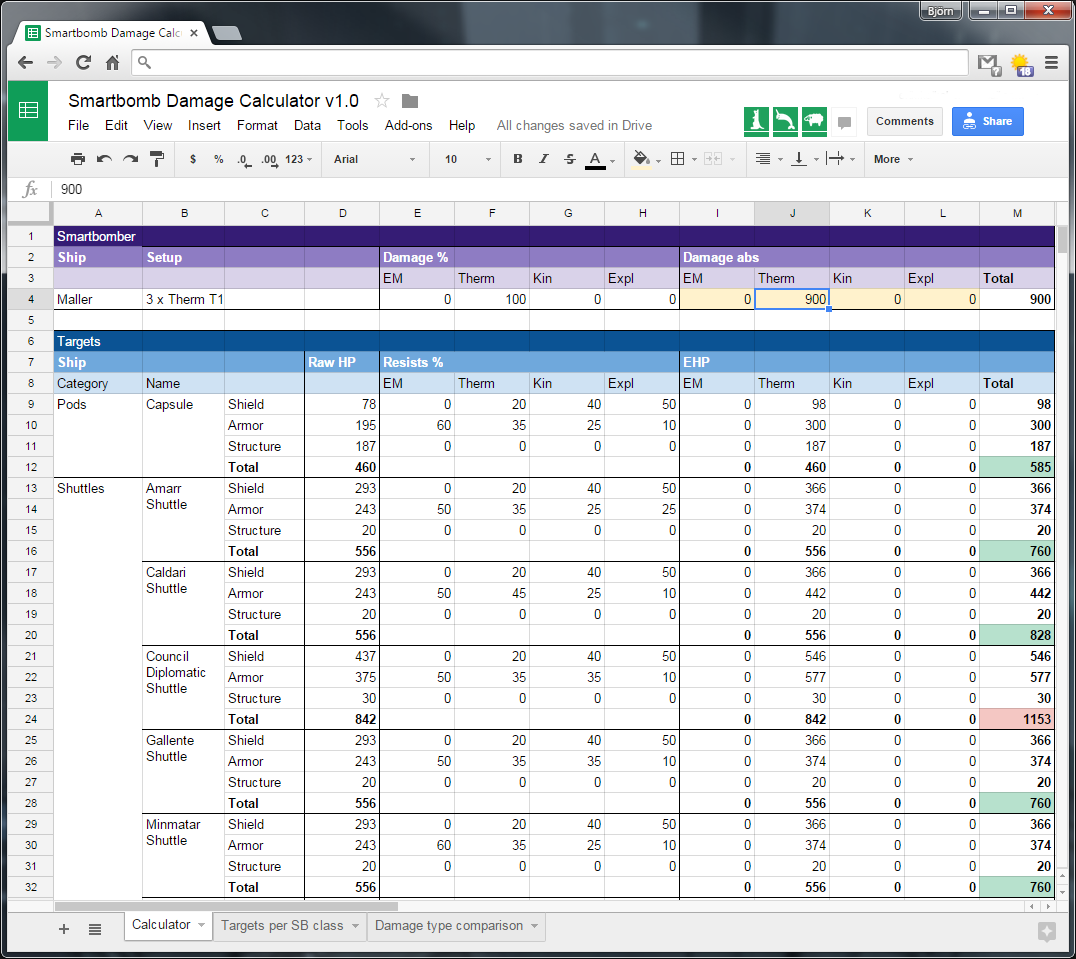 Based on the knowledge how smartbombers operate, we can derive a few strategies on how to avoid them. Note that the first two works best against basic smartbombing tactics (e.g. a stationary smartbombing Maller), but not always against advanced tactics (e.g. Smartbombing battleships or T3 Hunters).

If you have any questions or comments to this article please let me know in the comment section.

Here is the fitting for the smartbombing Maller in EFT format:

As you can see from the following chart, using thermal damage for your smartbombs on your Maller is the most effective choice. The reason is that shuttles and rookie ships have different resistance profiles, and the resistances against thermal damage happens to be the lowest among these ships. This means that any other damage type will reduce the amount of ship types you can kill with your smartbombing Maller.

2 Replies to “Guide: How to catch a pod in low sec or the art of smartbombing”