imagine you could analyze the details of a PVP fight after it is over. Imagine you could later see how much damage each ship applied over time, and what weapons were used.

Actually… this feature is available for Eve Online, but not many know about it. Its called combat log analyzer and its a great tool to learn from a fight and further improve your skills as PVPer in Eve online.

During a fight you see messages on your screen informing you about aggressive actions (e.g. warp scramble attempts), how much damage your weapons apply to your targets and how much damage you received from your opponents. These messages usually vanish quickly as new messages appear, but you can review them later under “Logs and Messages” (Eve Menu / x). This is great to find out later some specifics about the battle, for example how much damage you actually applied or who got first point on the target. I recommend setting the number of messages shown to the maximum (1000), so you don’t miss anything.

A Log Analyzer goes one step further. It visualizes the information from the combat log and shows a graph of damage application of all parties over time. This hugely increases the readability of the information and allows you proper analyse what happened during the fight.

They are several 3rd party log analyzers available. One tool that I found works very well is the Eve Combat Log Analyzer.

Please see below for an example of the result created with the Log Analyzer. Its from a fight between a Brutix (me) and a Drake (Natalie Delisle) and a Rattlesnake (Tumeteus Ambraelle), which joined the fight later. I used a Blaster Brutix with buffer armor tank, the Drake was HAM fit. Both had webs and Scram. 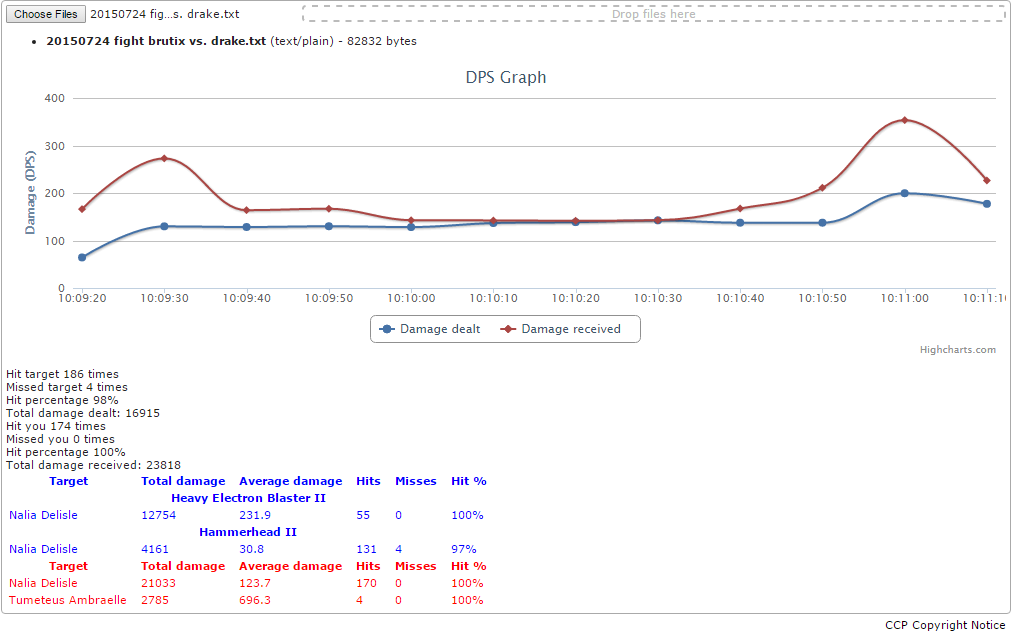 As you can see on the graph, the Drake was able to apply more damage then me, especially at the beginning and at the end. I was too close to the Drake in the beginning, so I had problems with tracking. The fight was very close, but in the end the enemy Rattlesnake joined the battle and together they killed me.

You combat log is automatically stored on your local hard-drive for any of your characters. You will usually find it under: “Documents\EVE\logs\Gamelogs” of the current user.

In order to analyze a fight just open the Eve Combat Log Analyzer webpage and point the tool to your recent combat log. It will then upload and analyse your log file and display the results on screen.

If you have a rather lengthy combat log file it helps to make a copy and delete all unrelated log entries from the file. Make sure you to keep the header in the file so that the Combat Log Analyzer recognizes it as valid log file.

Note to the developer