being a PVP pilot in Factional Warfare is a costly business. Even as a good pilot you will inevitably loose ships from time to time. Depending on how much you play and what ships you fly this can amount to several 100M ISK per month.

So you need to have a good and reliable source of income. There are many ways to make ISK in Eve, but most required a lot of SP and time investment in order to work.
One very effective way – especially for pilots in Factional Warfare – is to run Factional Warfare missions.

Please note that this blog is aimed mainly at Caldari Milita pilots, so some concept might not work in the same way for FW missions from other militias (e.g. the militia NPC will use different kind of EWAR according to their race and you will need to adapt your ship fitting and tactics accordingly).

By running Level 4 Factional Warfare missions you can make a couple 100M ISK in one evening with little risk. All you need is a stealth bomber with decent missile skills and standings of 5.0 or higher with either State Protectorate or Caldari State. (If you don’t have the standings yet, the fastest way to get them is to run lower level FW misions, or run a fleet with a friend who has the required standings.)

You will find all information you need in this great video guide from subsparx. 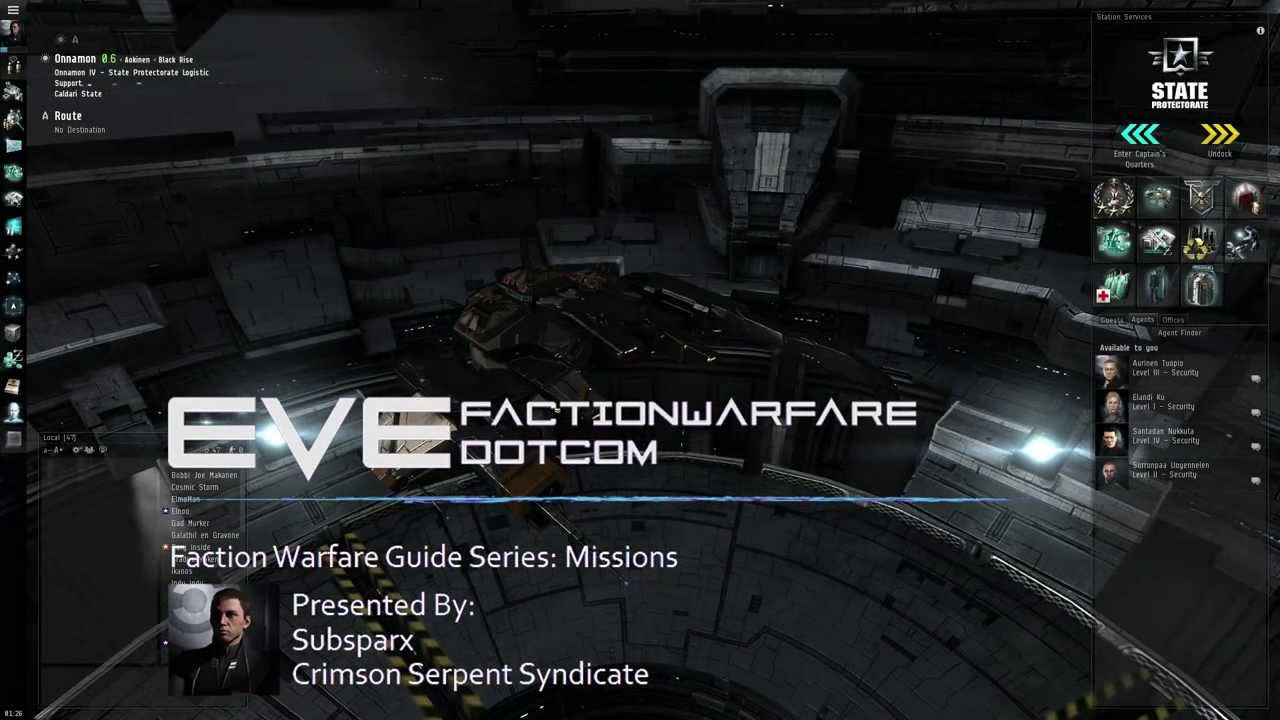 Its good practice to decline missions that are not suitable. Note that you can decline a mission from one agent every 4 hours without getting any standing loss.

Here is the list of L4 missions that are suitable for a stealth bomber (in alphabetical order):

For more details on each mission you might also want to check out the FW mission intels on eve-survival.org. It describes for many L4 missions the mission layout including ship types, EWar, waves, etc.

In order to maximize your ISK/hour rate you want to pick up several missions at once, e.g. 3 – 6 for one run. It also makes sense to pick up both L4 and L3 missions.

Use the “Agent Finder” in-game (“People and Places” / “Agent” / “Agent Finder” ) to find the nearest mission hub with the right agents. e.g. for Caldari Militia missions set the filter to:

Be aware that some stations in low sec will not be accessible if the system is occupied by the opposing faction. You can use your Factional Warfare window to check occupation station.

See the appendix for a full list of FW mission hubs for Level 4s.

As explained in the video please find below example fit for a low SP character (Minumum skills + all relevant missile skills at Level 3).

Fly save and don’t forget to donate some of your LPs to the iHubs so that we can keep a high tier level in the warzone.

A big shout-out to Subsparx and BEETHOVENSMITH for their valuable input to this blog.